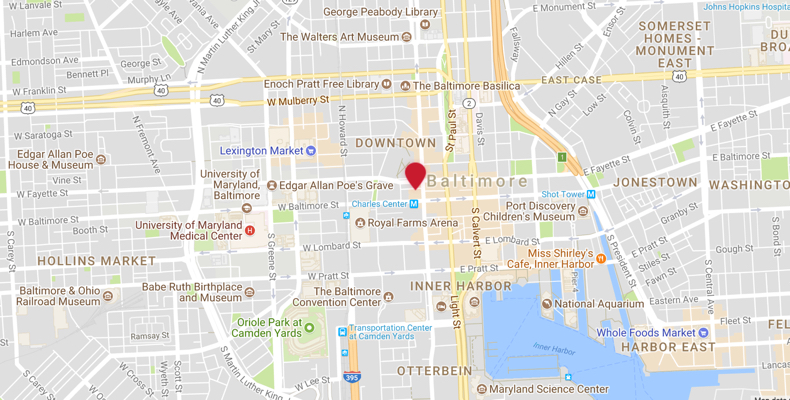 Learn the lay of the land

Navigating to our Baltimore hotel

You’ll find us at a highly desirable location — on the corner of West Baltimore and South Charles streets, near the city’s beloved Inner Harbor, a mecca of family-friendly attractions, alfresco restaurants, and happening nightlife venues. We’re happy to help you land in the center of it all, smack-dab in downtown Baltimore, just steps from Charles Street Station and two blocks from the Baltimore Convention Center. We are also only 7 minutes from Penn Station, 10 miles from Baltimore/Washington International Airport, and not far from Camden Yards. From our inviting venue, guests can easily explore some of the city’s most beloved, personality-filled neighborhoods (like Mount Vernon, for example).

No matter what you’re in town for, find your destination with ease using the city’s main transit system, the MARC train. The MARC runs 7 days a week, through Baltimore City, Maryland, Washington D.C., and West Virginia. Tickets can be bought at any Quik Trak machine, with Amtrak Ticket Agents or online. Travel from Baltimore to D.C. in under half an hour on an express train or commute within the city for less than $10 round trip.

Take a MARC or Amtrak train from Washington Union Station to Baltimore Penn Station. MARC fares are generally lower than Amtrak fares. Purchase tickets at any Quik Trak machine, or at an Amtrak ticket window.